Tumescent Liposuction Recovery – What You Need to Know 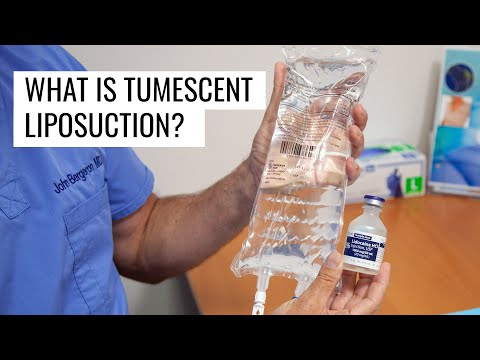 Tumescent Liposuction Recovery – What You Need to Know

Cannulas were big, because needed to be powerful, since solid fat is hard to extract. The intervention was performed in general anesthesia, because it was painful for the patient. Also, if you’ve ever seen a liposuction being performed, surely you were impressed by how much bleeding is involved in the process. But at that time everything was seen as normal and patient just considered the high risks of the operation as a price to pay to reshape their body effortlessly.

With such a traumatic approach, the recovery from liposuction was long and painful. Apart from the immediate recovery from general anesthesia, that compelled the patients to stay more than one night in the hospital, recovery form the intervention itself was complicated. Swelling and bleeding were common, compression garments needed to be worn for at least two months and the results could be seen only after six months.

Fortunately, “dry liposuction” is not performed anymore. It’s a technique of the past, as cosmetic and health medicine developed through time. The most common procedure now performed in USA in the tumescent liposuction. This technique has many advantages compared to the traditional liposuction.

The tumescent technique uses a solution of lidocaine and epinephrine that helps the suction of the fat. Prior to the surgery, the surgeon injects this solution in the targeted area.

Lidocaine is an anesthetic which will help the patient in experiencing less pain. Also, as a result of the injection (which is often combined with other fluids), the area will swallow and become firmer, helping the surgeon to perform a better surgery.

Epinephrine is a constrictor of the blood vessels and its role is to minimize blood loss. To minimize also bleeding and scarring cannulas are smaller, there’s no need for big, invasive cannulas.

This technique has been proven to provide many advantages such as:

No need for general anesthesia, as the procedure is much less traumatic.
Lidocaine acts as anesthetic and antibacterial agent
No major blood loss, thanks to the action of epinephrine.
Smaller cannulas result in less scarring, less swelling and less bruising.

Tumescent liposuction recovery also had a big improvement. No general anesthesia and non-invasive cannulas reduce greatly the risks of liposuction and the recovery period. The whole intervention is usually carried out in 2-3 hours, depending on the area to treat and the amount of fat to extract.

The tumescent liposuction recovery period is about two weeks. You may need to wear compression garments for some more time. One possible adverse side effect is that, since lots of fluid is injected in the body it can drip outside from where the cannulas were inserted. This might result in a discomfort but can be minimized with pads, similar to the ones of pregnant or breastfeeding women.

Cellulite Treatment Options Today, medical treatment options exist for just about any adjustment to your body you may want...
Read more

Cellulite Exercises and Myths If you have decided to attack your cellulite through exercise, congratulations! This is definitely the...
Read more
Load more